Winemakers and farmsteads opened their doors to visitors of the 15th Teran wine festival in Tomaj last weekend.

Teran? Tomaj? Yes, you heard well. But hold on a minute, what exactly are these? I’ll start with Tomaj, which you’ve unlikely ever heard of, unless you’re a true Karst village fan.

Tomaj is a typical Karst village in the southwest of Slovenia. Stretching up onto Tabor Hill, it lends the visitor beautiful views over vineyards, fields, and grassland called ‘gmajna’. Just picture narrow alleyways flanked by stone houses with tiny coloured windows and doors.

Lying along the Karst wine route, it houses a number of farmsteads and wineries that supply some of the region’s culinary and oenological treasures. This village, together with its farmsteads and wine cellars, are best discovered on foot. So I suggest you leave your car behind and wander around on foot.

That’s exactly what we did last Saturday when Slovenia paid homage to its Teran wine by means of an open cellars day. We spent a good six hours walking from one wine cellar to another, tasting this dark, ruby-red wine and munching freshly cut prosciutto slices. Remember!? Teran and prosciutto are inseparable in the Karst.

Teran is an autochthonous Slovenian wine derived from a variety of Refosco grapes that thrive in mineral-rich ‘terra rossa’ soil. The wine bears a protected designation of origin (PDO), or ‘posebno tradicionalno poimenovanje’ (PTP) in Slovenian.

Rich in acids and minerals, including iron, it’s widely believed to contain medicinal properties. Pharmacies even sold this wine in bygone times! The only downside to drinking this blood-like elixir is the feeling that it’s corroding your teeth’s enamel. Try brushing your tongue against your teeth. You might easily mistake them for sandpaper.

The sandpaper feeling didn’t deter us from pursuing our Teran adventure. A highlight was our stop at the Petelin Rogelja Winery. This year, they produced a barrel-aged version of Teran using the wine derived from the vines of an abandoned vineyard.

According to winemaker Matej Rogelja, “The abandoned vineyard was being sold by an old man who didn’t go down too well with the locals. No one was interested in buying it. They were afraid they’d also be obtaining the bad karma that went with it.”

Petelin Rogelja Winery stepped in and acquired this vineyard. That was undoubtedly a good move. It certainly is capable of turning out some of the best Teran around. The wine is extra dark with added minerality and oomph.

Matej also leaves the grapes to fully ripen before picking them, which results in a sweeter wine. This sweetness and the barrel-ageing process contribute a great deal to toning down the scratchiness of the wine’s high acidity. What a marvel!

The winemakers’ harvest work is definitely something to write home about. I had an eye-opening discussion with one of the winemakers at the festival who explained to me how the grapevines are ‘trained’ to grow. “We get the vines to grow up along a supporting framework and form a cover of leaves at the top.”

That’s a clever way of providing natural shade to protect the soil from the desiccating sunrays, which are quite plentiful even during harvest time. The Karst climate is rather harsh. Dry summers impose their scorching effect, while the infamous, dry, northeasterly ‘burja’ wind aggravates the contrastingly cold winters.

The winemaker went on: “Harvest work is even harder for us as we must reach up to the grapes and cut them by hand.” Oh yes, I agree, that can cause quite a neck ache!

Times can be tough for the winemaker, but luckily for the wine enthusiast, the latter can simply enjoy the results of the winemaker’s labour in the cool relief of the many wine cellars or ‘hrami’ that abound. Not only do the cellars provide a cool environment for wine sampling, they also serve as a fascinating point of interest. Most are carved into the rock. Some even occupy the space of naturally formed caves. I must say, this region certainly boasts some really awe-inspiring cellars.

The wine event last Saturday wore on faster than the speed of light. We were never short of entertainment as a troupe of accordionists joined us as we travelled between food and wine stops. There were a number of Karst delicacies on offer apart from prosciutto: cured meat from other parts of the pig, tarragon pancakes, various types of cheeses, homemade breads, to mention a few. There was hardly enough time to try all the food, but we did manage the delicious honey ice-cream towards the end.

Since Tomaj was so full of activity, we never made it to the other nearby villages where the event was also being held. So next year, we’ll also make it a point to visit Križ, Šepulje, Filipčje Brdo, and Grahovo Brdo.

Meanwhile, if you’re ever in or around Trieste, Italy, you should seriously consider visiting this area. It’s just across the border from Italy. Tomaj and Trieste are only 18km apart, for instance. I urge you to come see this part of the Karst for yourself, and make sure you also stop by at the beautiful medieval village of Štanjel, just slightly further up north of Tomaj. Happy travelling!

View more of my photos from the Teran Open Cellars Day below by scrolling left or right. 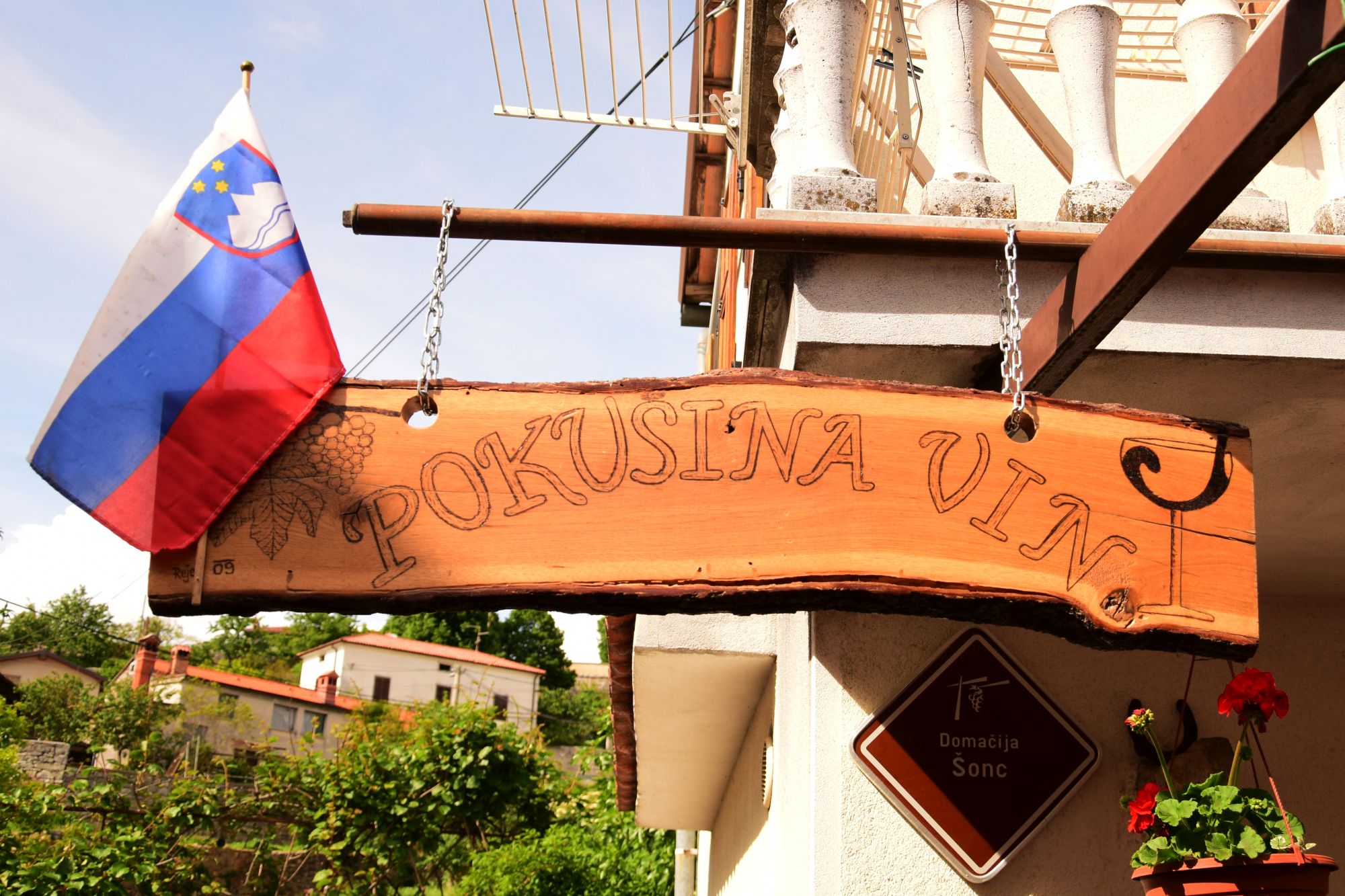 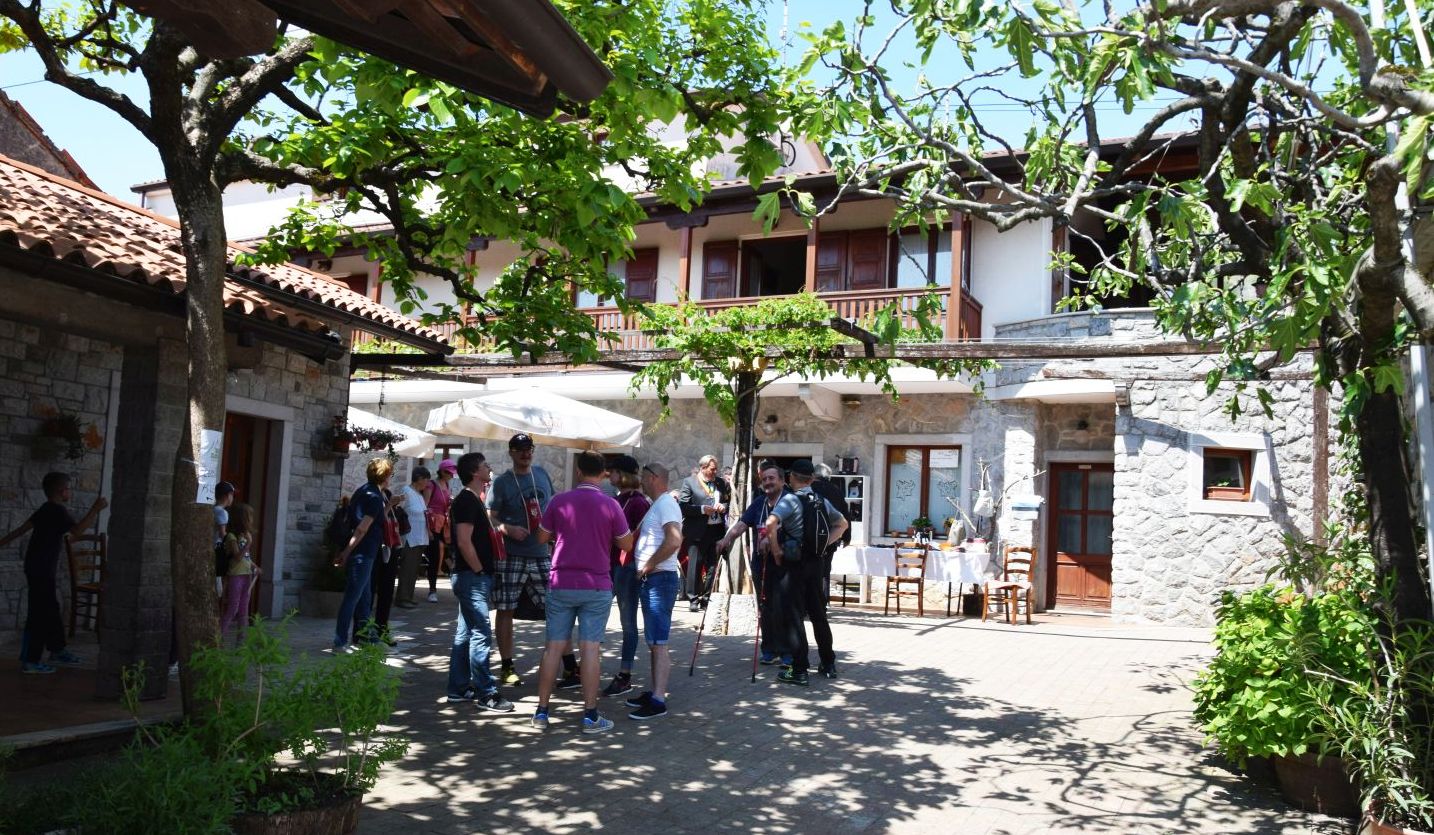 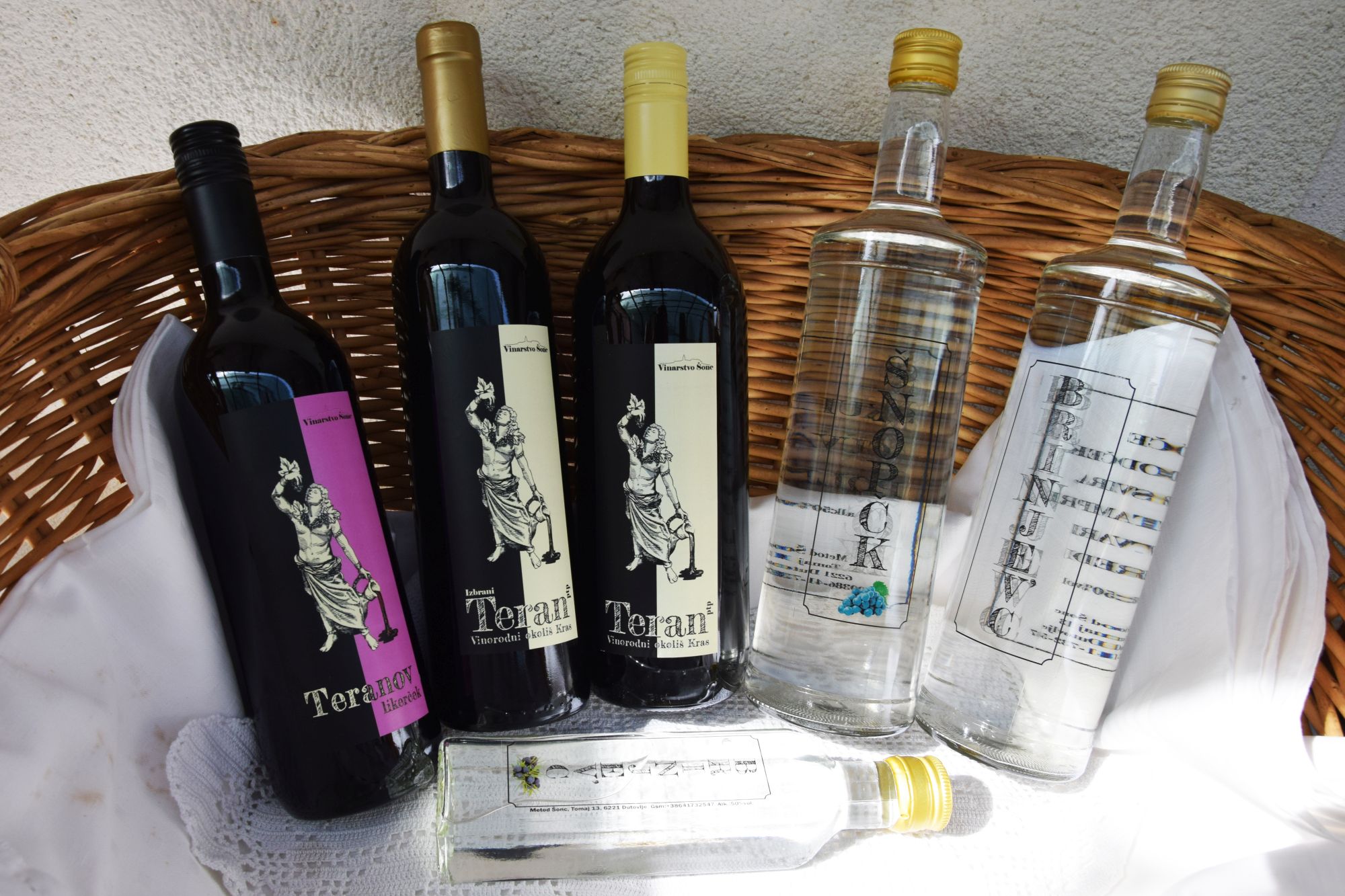 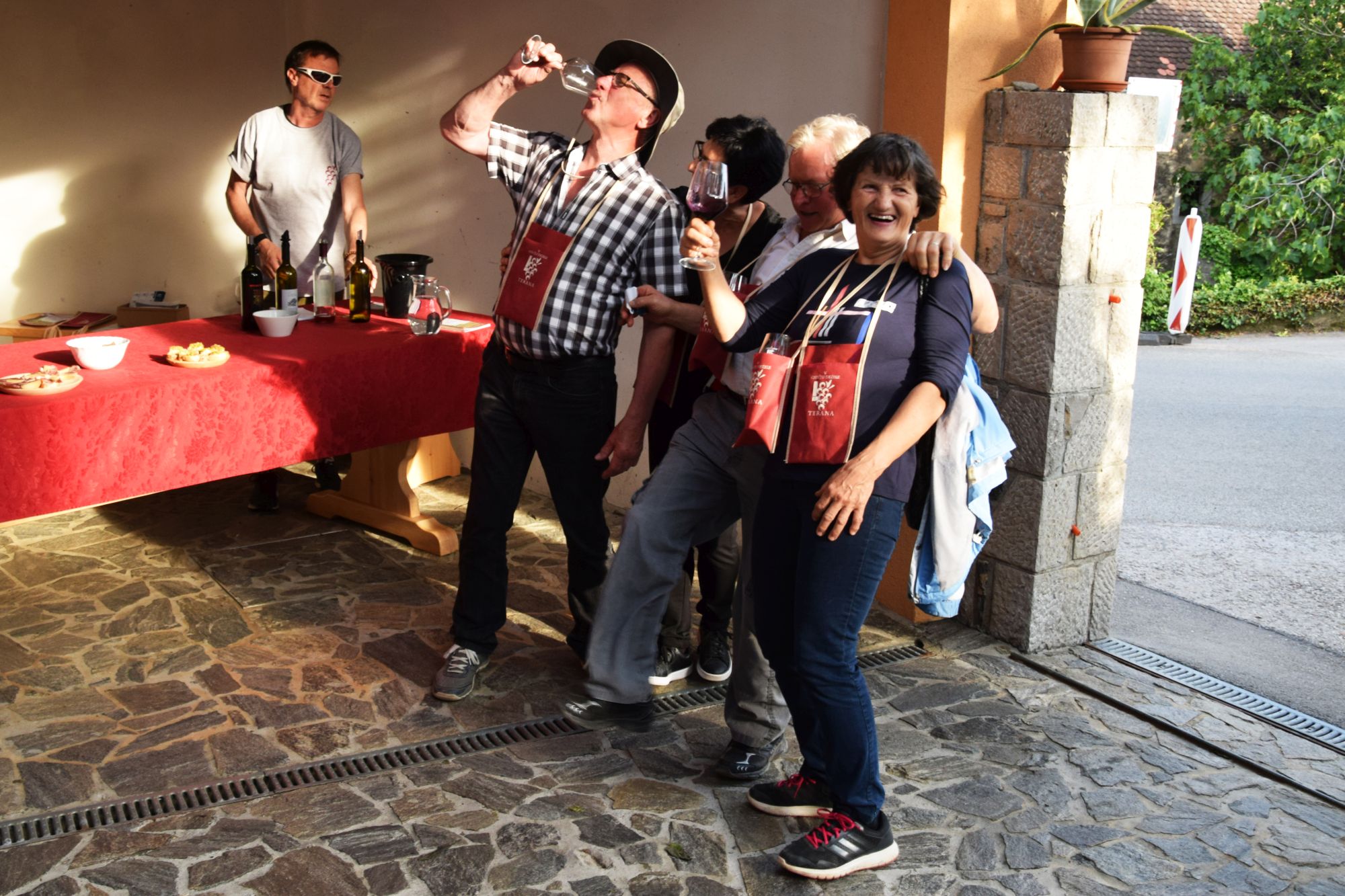 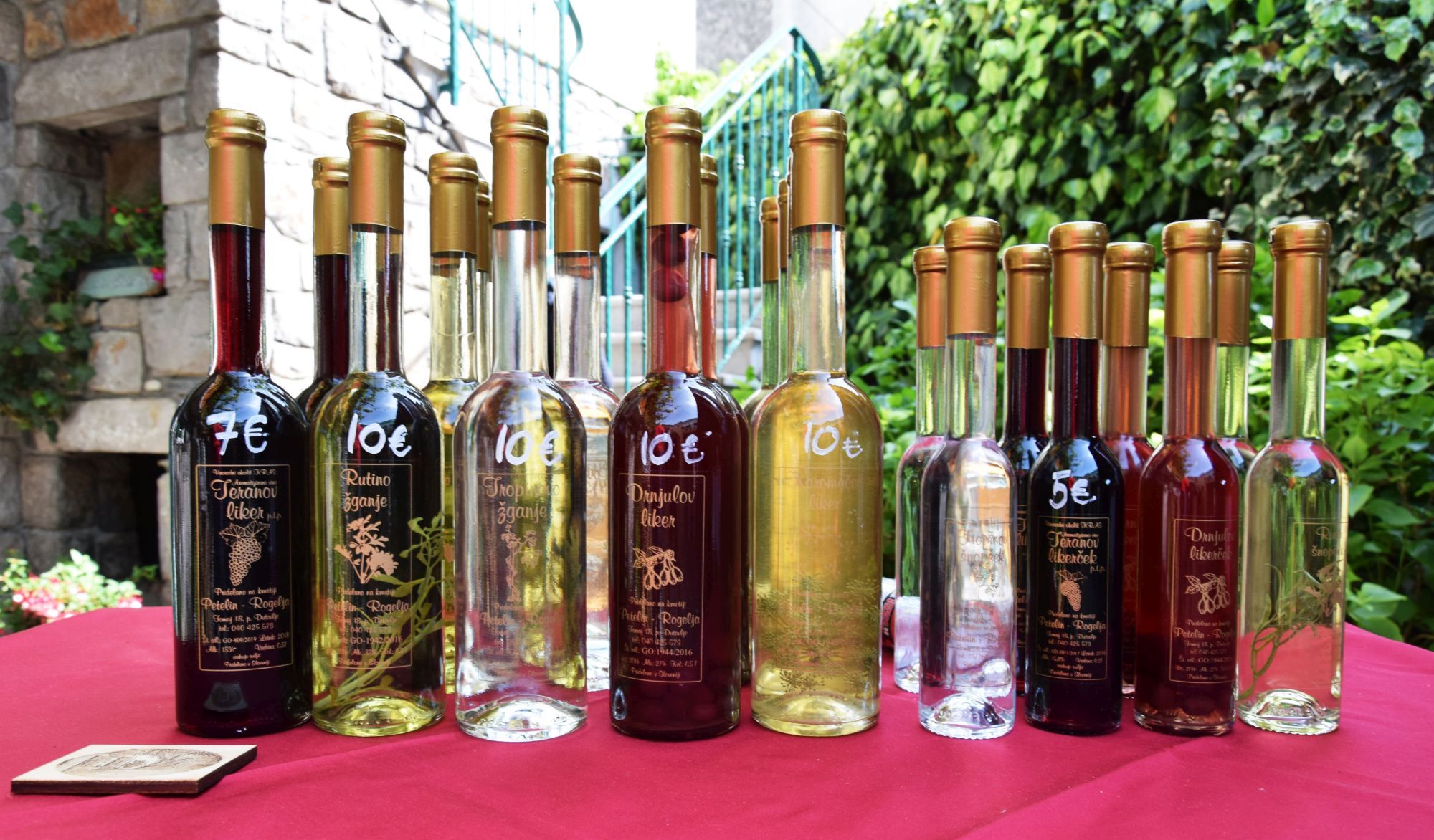 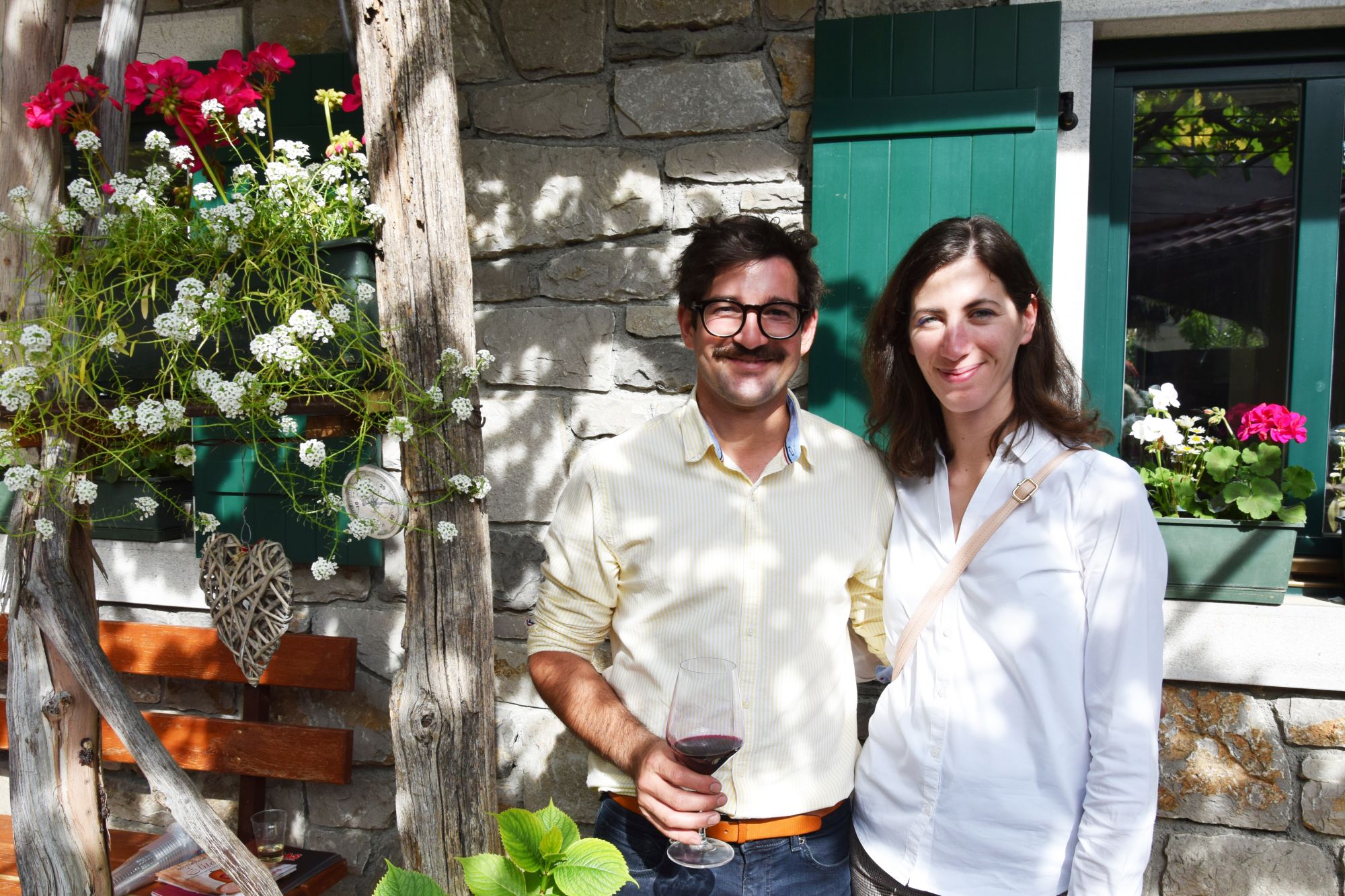 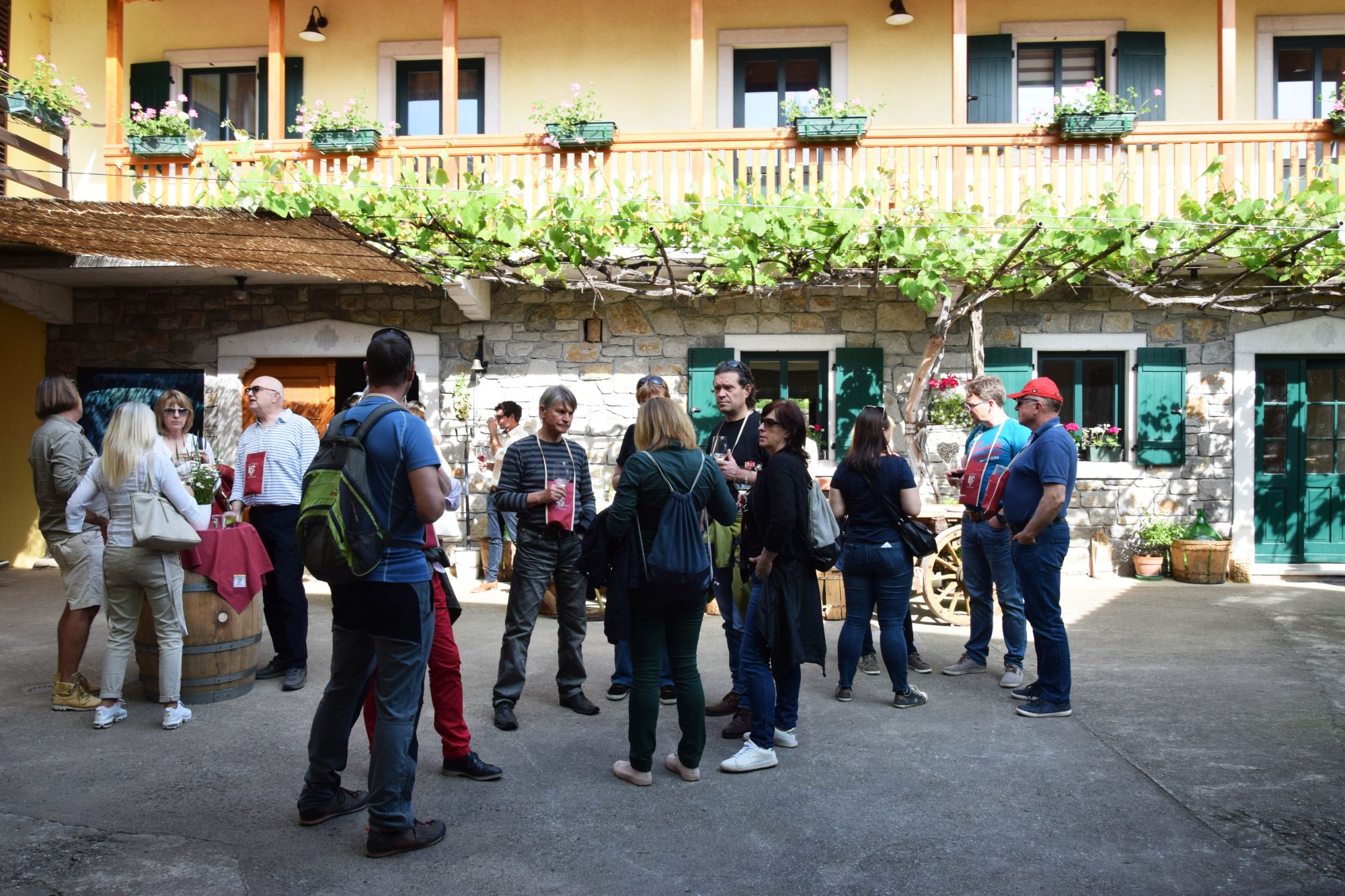 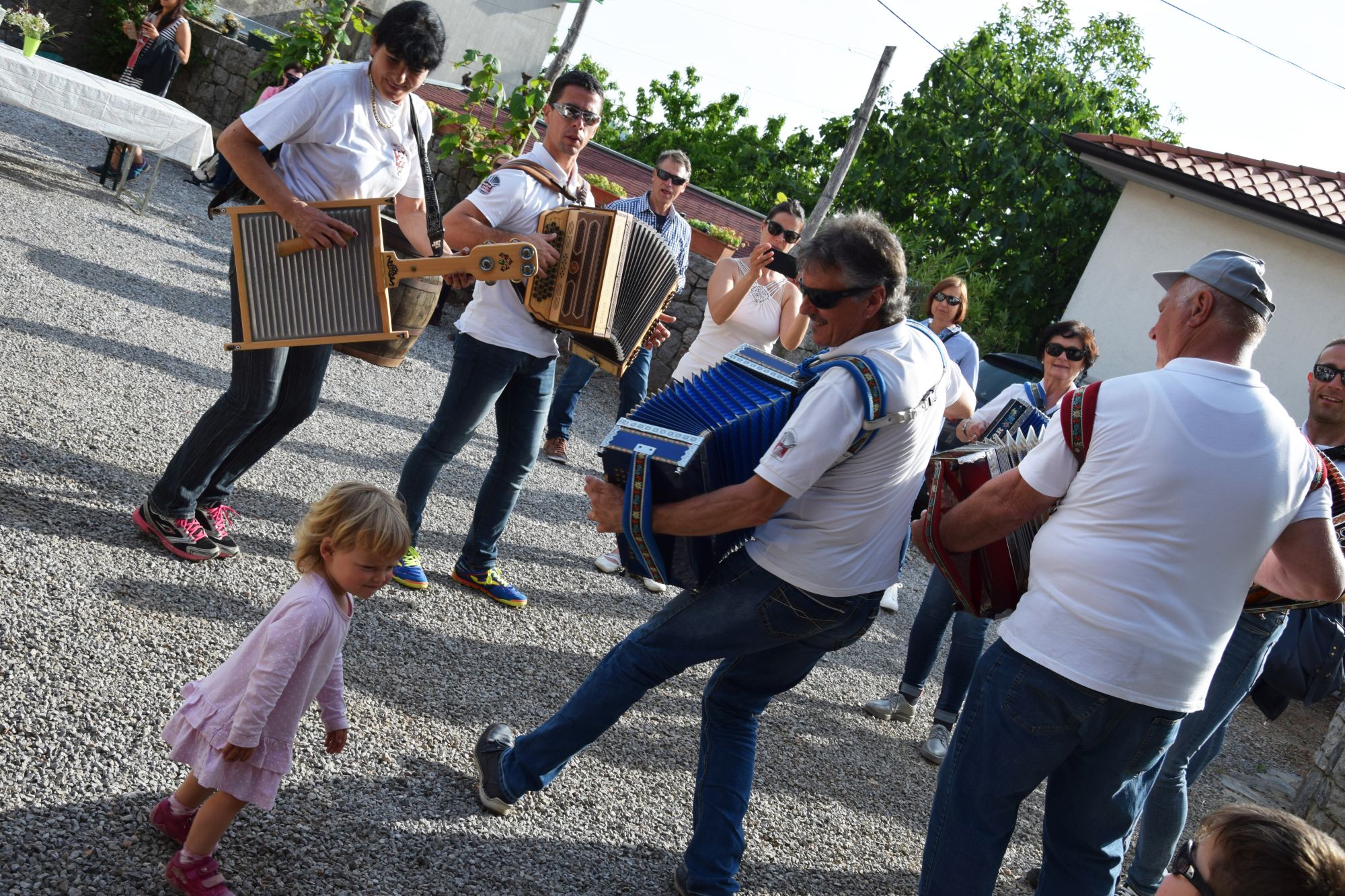 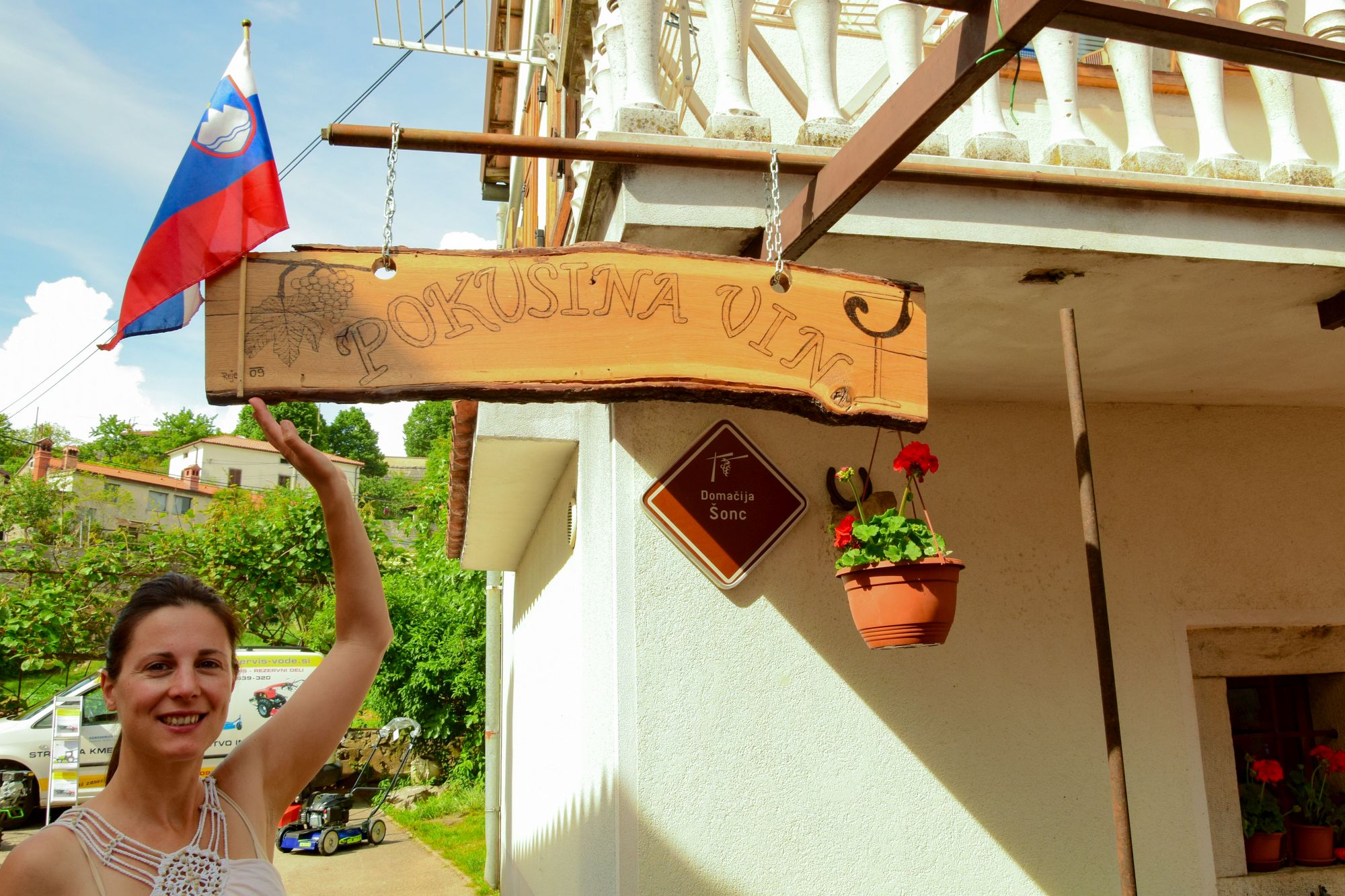 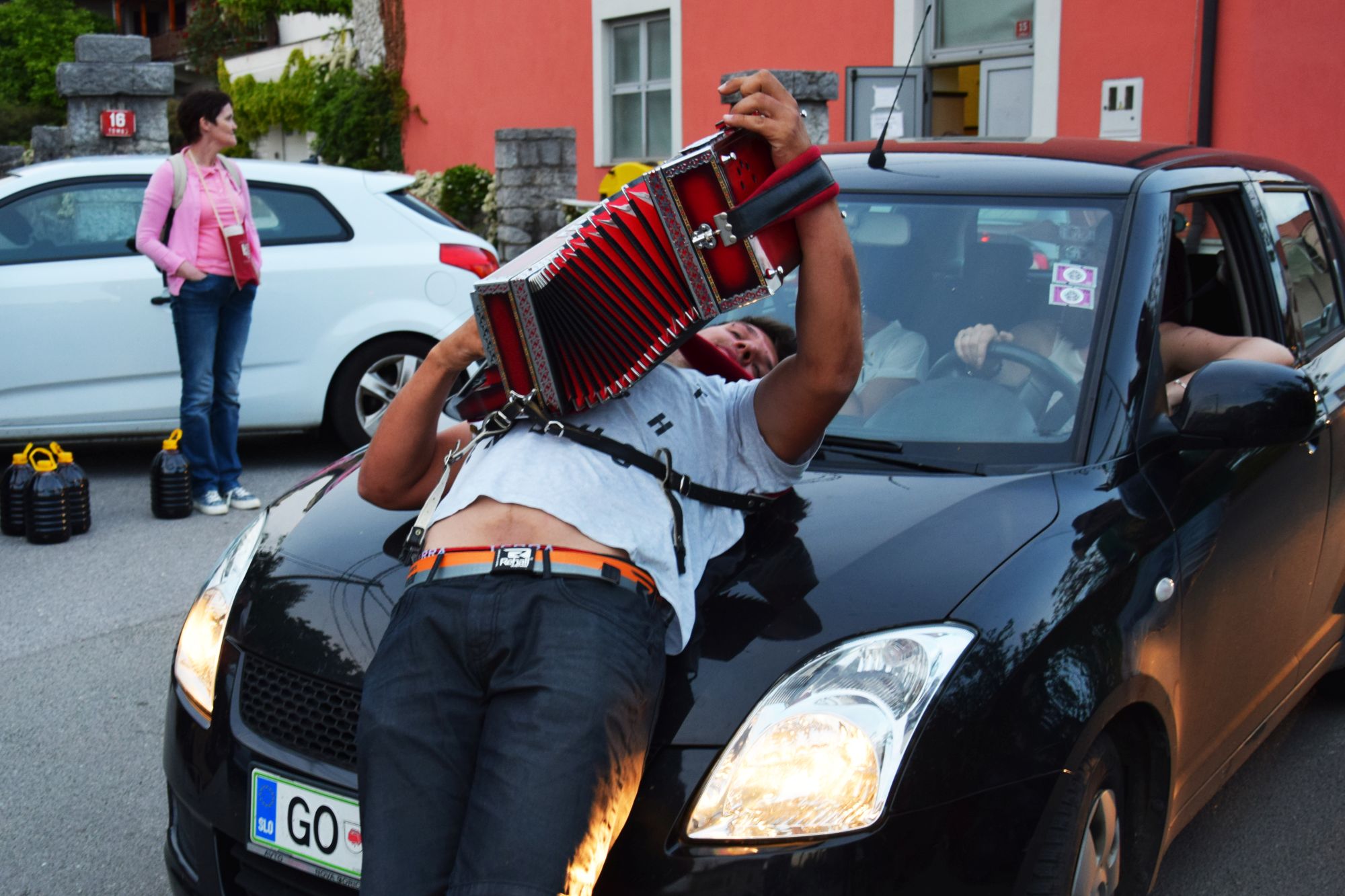 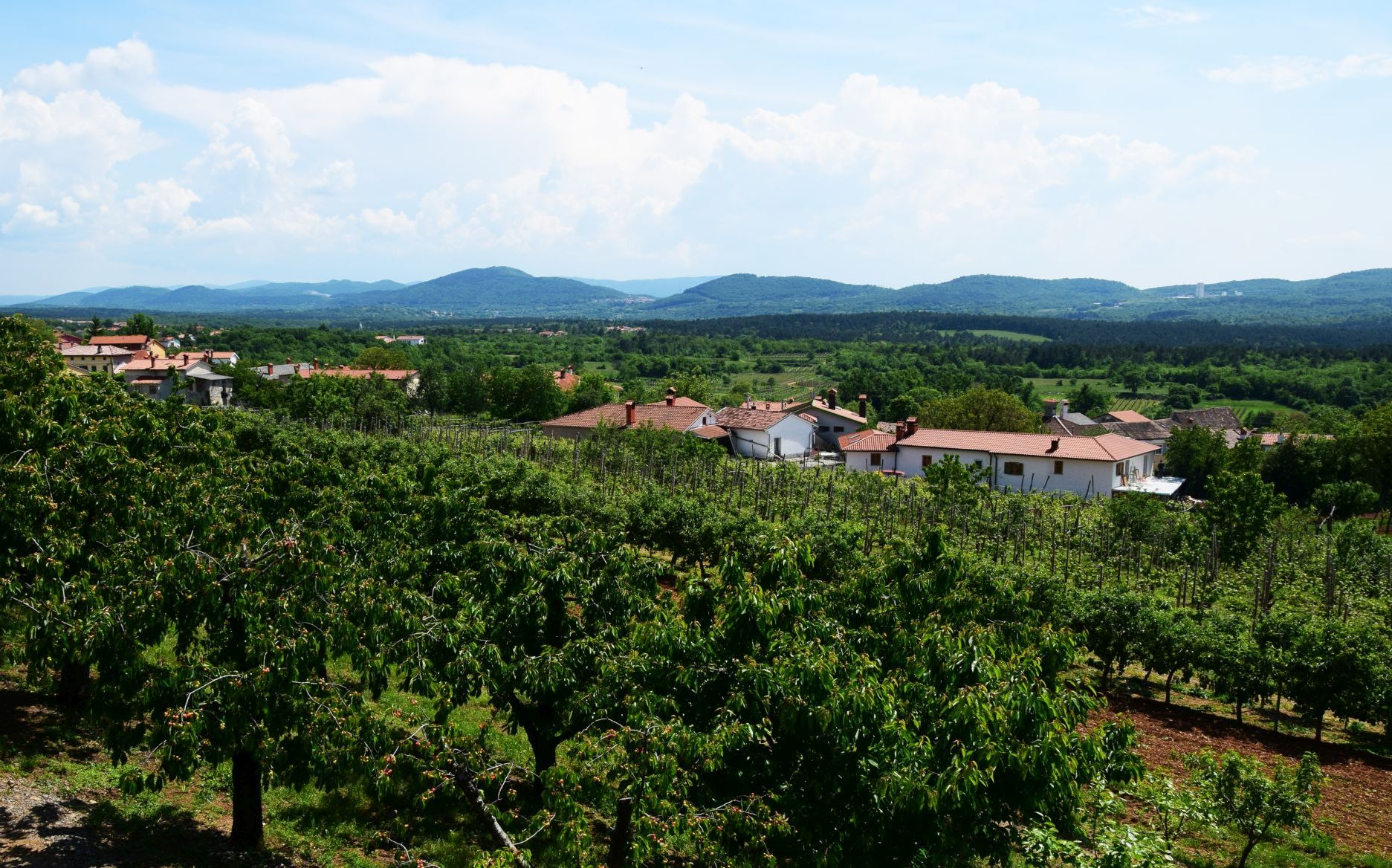